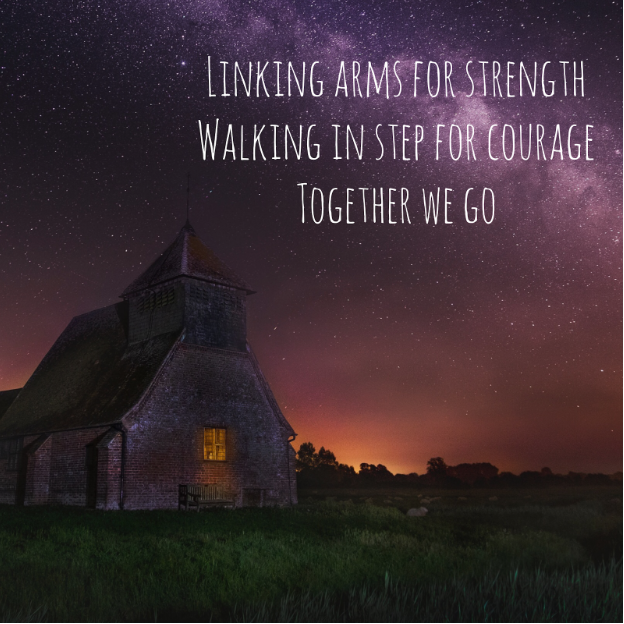 “Let’s go to Bethlehem and see this thing that has happened, which the Lord has told us about.”

Interesting fact: shepherds would normally work in groups either looking after one large flock, or each bringing their own and merging their responsibilities.

I have always envisioned shepherds scattered, not gathered. Yet, in the Christmas story, it says, an angel and heavenly hosts appeared to the “shepherds” as if they were in very close proximity. Once they recovered from this high of an actual angel wrecking the night, they turned and said to one another, “Let’s go…” Which implies they were also in regular communication with one another.

What I love about this discovery isn’t the fact there was some ancient boys club. I love that they were a group of regular Joe’s who got to go on a fantastic voyage, eh, journey--together (shout out to anyone who got the Coolio reference).

God didn’t ask them to leave their flock unattended and set out alone. He gave them the option to go at it together.

Isn’t life more fun with others? Who doesn’t want to go on an adventure with their BFF? Pick me!

The gift of community is from God. He knows we are often scaredy-cat, yellow-bellied, chicken heads when it comes to doing hard stuff alone. And maybe not even hard stuff. Maybe just the regular stuff. Like inviting your neighbors over for dinner or meeting with a hurting friend for coffee, or getting up at an hour that isn’t normal for people to be awake to work out with your spouse...eh hem...thanks hubby.

Life is so much more rewarding when you have others excited about the same things you are.

If I were one of the shepherds, I would have peed my pants twice over after seeing an angel. Then, to think I would even fathom going off into the night to find some baby born in a barn who is supposed to be the new God-King. Get real! PS. It wasn’t likely a barn as we learned from the last post.

But how cool is it that they had a built-in people with which they linked arms to go see this new thing?

That’s what I want my life to look like. A community of my favorite people, linking arms to go see what God is doing! My guess is you do too.

+ Have you ever had to do something (hard or not) that was better because of others?

+ Do you have a community you link arms with?